Taxus baccata Trough Hedging or English yew is the classic hedging plant, used for centuries in high-class formal gardens, due to the ability to be trimmed up with crisp edges and to be shaped into weird and wonderful shapes.  It is still a much-loved hedging plant.

English Yew (Taxus baccata) hedging is one of the classic instant hedges. It has been used in the very best gardens of the grandest Stately Homes and Palaces for many years as it forms a brilliant back drop to any planting that is in front of it, as well as being able to be trimmed into amazing geometric and formal shapes. With regular trimming it forms a great dense evergreen hedge. It can be kept as a low hedge of around 45-60cm in height but can also be left to make a hedge in excess of 250cm in height, but at all of these heights it will still be dense. If left un-trimmed it will flower and produce a red fruit in the Autumn, but with regular trimming these will not be produced.

English Yew (Taxus baccata) is one of only 3 conifers that are native to the United Kingdom.  It can be found growing wild on chalk soils.  It is not particularly fond of sitting in wet soils and can struggle in these situations, however if the drainage is good it will happily grow in soils that are almost pure chalk through to very acidic peaty soils.

English Yew (Taxus baccata) hedging will add a touch of elegance to any garden that it is planted in and will form an easy to care for hedge for many years.

It has been awarded an Award of Garden merit by the Royal Horticultural Society in 1984.

Taxus baccata Trough hedging is a young hedge.  Being in the troughs it is easy to move around a garden as well as to handle and to plant. 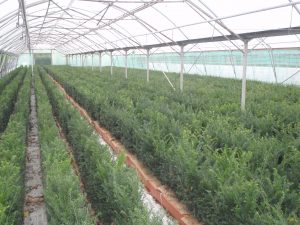